It was Monday, August 8, 2016 and Jared had died 8 days before. I was numb at this point with a myriad of emotions wrestling within me. Sorrow, grief, despair, hopelessness...each one fighting for control and I honestly didn't care - it hurts too much when you care. It was the first time in my life I could just sit and do nothing. What did it all matter anyway? 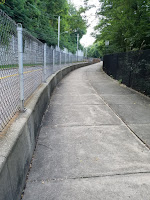 The one thing I could do is walk, so I decided to walk Puritas Road hill (aka the Hill). It was before my Lord had started giving me Life Lessons - actually, this was to be my first - Overcomer. I was passing a house with a man washing his truck who had music coming from his garage. I recognized the song even though I hadn't heard it for a while. I can't say exactly what it was but I honestly just felt better hearing it. 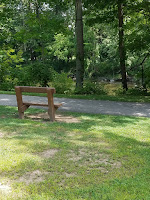 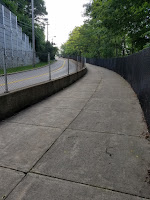 When I got to the bottom of the Hill I sat on a bench by the Rocky River, found the song on YouTube and listened to Mandisa sing "Overcomer" over and over and over again. I let those words wash over me and as they did I began to get some hope back. I could feel life infuse into me as I sat there. The phrase that ministered most to me was, "Stay in the fight 'til the final round. You're not going under 'cause God is holding you right now..."  I would  love to put all the lyrics here but instead I will put a link at the end so you can listen to the song.
I don't  always feel like an overcomer, and I especially didn't at this time in my life, but what I do have is a God that isn't letting go of me and can get me through anything. Here's the thing - I had to choose to be an overcomer that day. I still wrestled with all those emotions but now I had chosen to fight. Many times since then I've had to remind myself, that in Jesus, I can overcome whatever the enemy may throw at me. Being an overcomer doesn't just instantaneously happen - it's a process, a series of choices made daily.

When we envision an overcomer we think of someone like this person on the mountain top with their hands in the air. What you don't see though is what it took him to get to this point. First, it all started with a choice to do it. We don't see the process of him climbing up the mountain - getting tired, slipping on the gravel, getting out of breath, fighting the elements. He probably had to decide several times on his way to the top if he was going to continue on or give up and turn back.
Overcoming is a process that will take our entire life. That complete  joy of standing on the mountain top will only come when we enter our Saviors presence. Thankfully, the Lord gives us tastes of what it's like to be triumphant while here on earth. Honestly, that's what each Life Lesson has been for me - a taste of heaven - feeling the presence of my Father.
I don't know what you're going through but I do know the One who is waiting for you to ask for His help. Revelation 3:20 says of Jesus, " Behold, I stand at the door and knock. If anyone hears My voice and opens the door I will come in to him..."  None of us can do this alone that's why God has given the Holy Spirit as not only a guide through this life but also as an encourager, to strengthen us and to keep us going. Please, allow the Father to give you help to get up your mountain. You won't regret it.